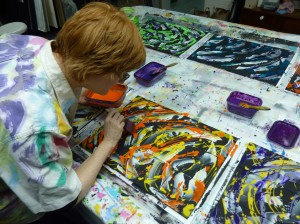 Alli Berman is an interactive artist with a fun, inclusive concept. She created her interactive PuzzleArt to help people examine the endless connections in art and life using elemental artist's tools – color, shape, texture and lines. Her interactive PuzzleArt has been to dozens of countries. Berman leads workshops to help people ages 1 to 101 think outside the box while they Connect to Creativity and to others around the world in her unique program. Her PuzzleArt has been called Brain Fitness art. Her PuzzleArt will be used in Asia in the coming year to help people find new ways to relax and activate their brains in a Hands-On Brain Fitness Initiative.

Berman is an artist, educator, author and lecturer for the past 25+ years. An educational advisor to the American Academy for Anti-Aging Medicine and founder of Anti-Aging Art, her art is exhibited in museums and galleries and in corporate and private collections worldwide. Author of Hands-On Brain Fitness, Hands-On Brain Fitness for Kids, and Adventures with PuzzleArt Alli in 3D!, Berman’s mission is to help millions around the world with her art.

I began my interactive modular art to find the connections. What started as a simple exercise to help me find personal answers after my stroke (CVA) grew into an interactive artform that has traveled the globe these past 20+ years. People ages 1 to 106 have participated in many arts and educational programs and have connected to abstract art, each other, and to me!”

Berman’s layered acrylics have a transparent watercolor quality. Her work is a fusion of Indonesian shadow puppetry, batik, and stained-glass sanctuary windows. It is a celebration of life in spite of all obstacles.

Berman’s work has been exhibited in museums and galleries throughout the US and in Indonesia. She has shown and shared her work in Grand Cayman, BWI. She had 25 feet of her interactive PuzzleArt in the public atrium at Tilles Center, Long Island, New York. Berman has hundreds of her PuzzleArt paintings on exhibit at the LICM – Long Island Children’s Museum: Swirls, Waves and Puzzles: The Art of Alli Berman through May 2011. Her art is in private and corporate collections around the world.

I have more activities to use in my practice and incorporate with reflex integration exercises.

I feel that unlike other visions courses that I have taken, you have given me tools I can actually use.

OT working with students in Middle School and H.S.

I find the PuzzleArt Therapy very interesting. I’m excited using it at my second job after school hours, which is a sensory clinic. I handle kids from ages 3-15. I can’t wait to use it on the students I’ve worked with for a couple years.

OT working @ D75, elementary setting and at a sensory clinic